I call him Rocket. 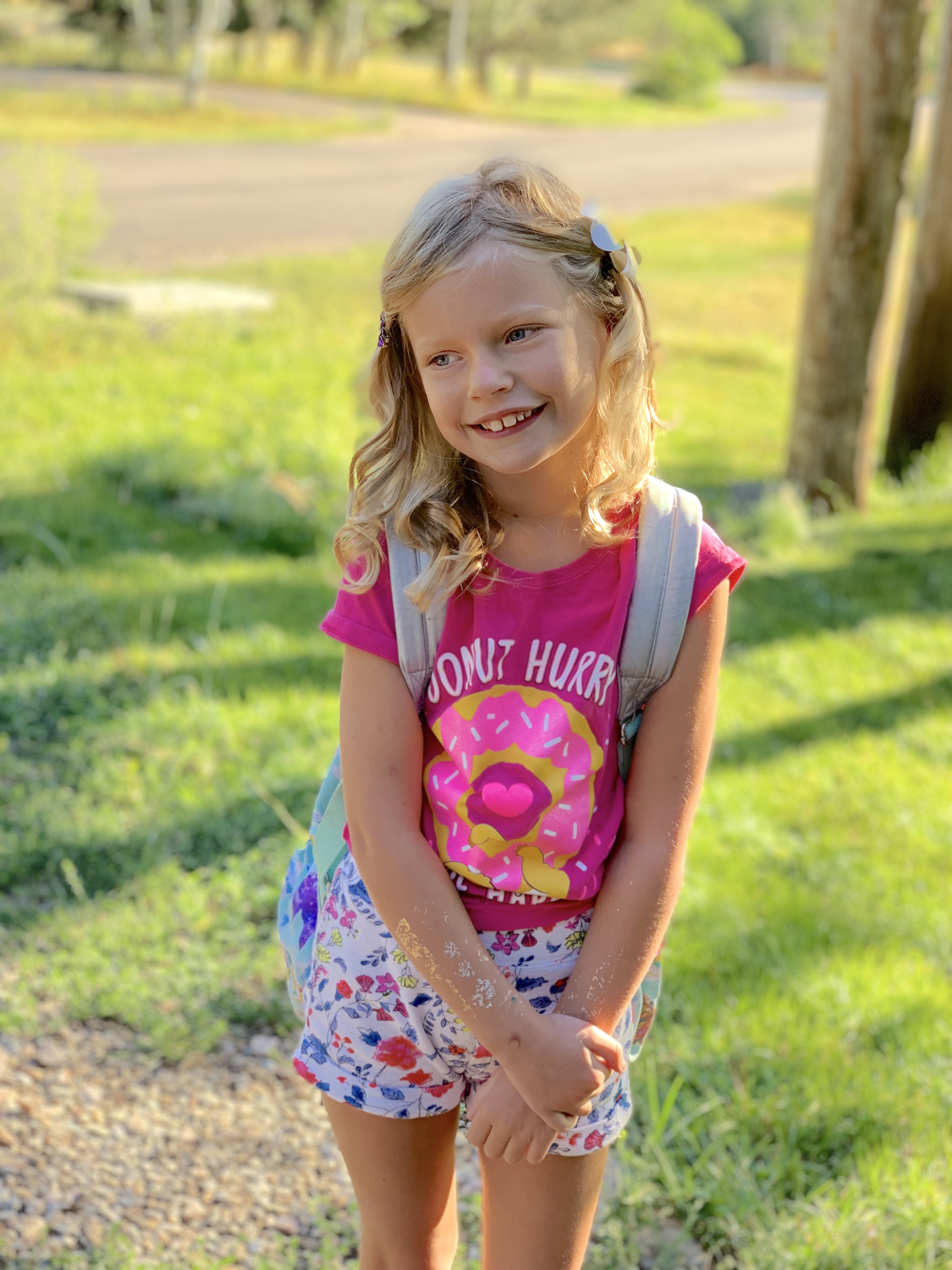 Della likes to eat breakfast at school. I think only four other kids do this.

George went on a horse ride with Bappa and Suzannah!

Della drank the rest of this olive brine.

And George got a haircut! 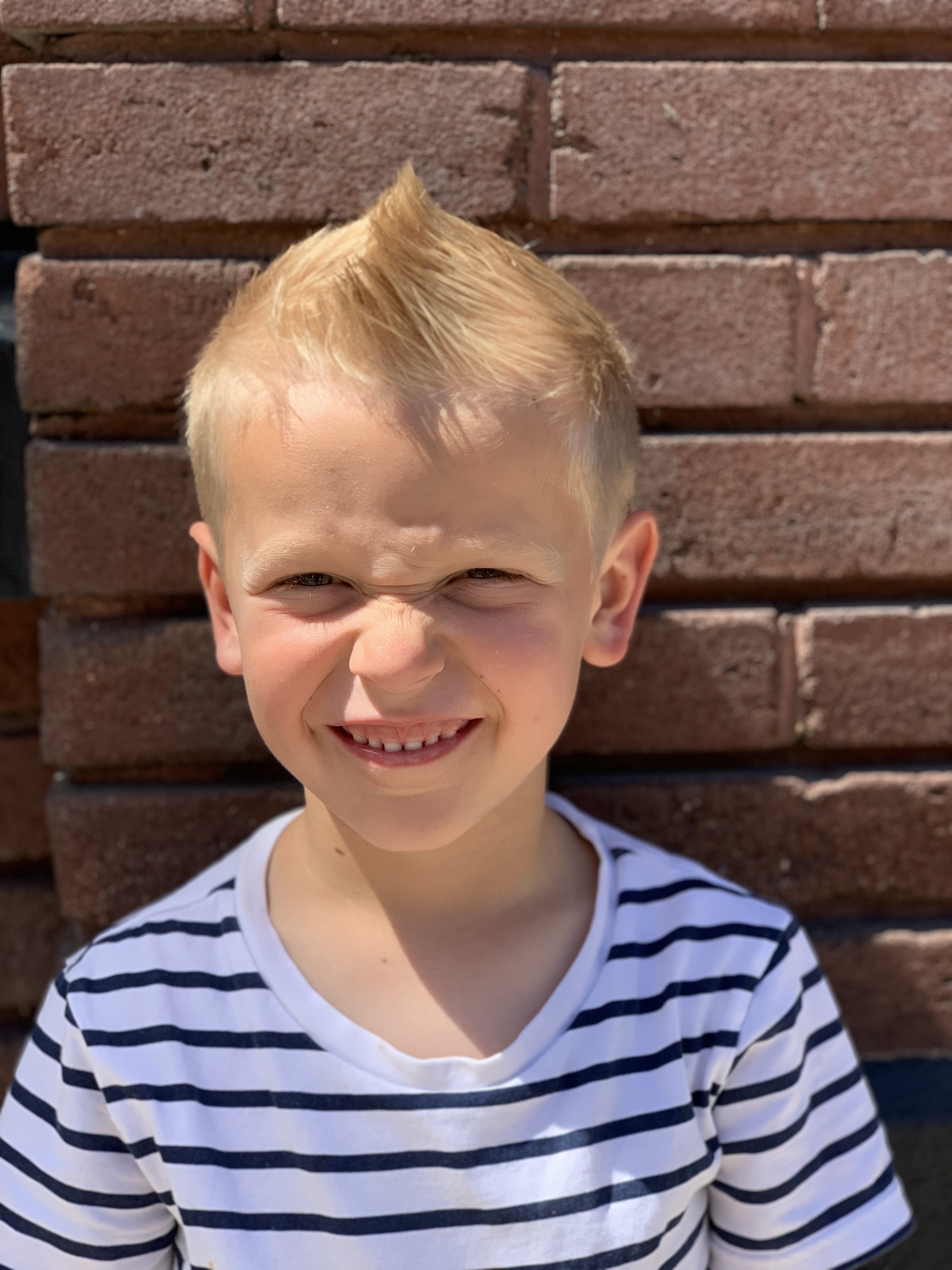 We just got back from camp!

Ohana is a family camp in Vermont.

Look at all the fine crafts we made.

There were 16 of us working on this stuff.

Here is Linda, completely loaded down with crafts.

Here are Della and Annie, making baskets at the waterfront.

Linda made a mega basket.

Della and Annie often wore matching outfits, making it difficult for people to tell them apart.

The boys were super into building gnome homes.

The girls built this one.

Nell made a puppet! Or at least supervised the making of one.

Steve helped George make the puppet that Annie is holding. Its name is Pig Newton.

This is what Linda made in her Quilling class.

I think Conn made this in Copper Enameling.

Conn also made this candle using a water balloon.

This is Della’s candle!

Annie made two container candles. Cheryl on the left was very patient with all of us.

Lizzie got really into felting, and Scott made a knife in woodshop. I’m sorry I don’t have a better picture of the knife handle. In pottery class, Brit made little hearts for all the ladies in the family.

Also in woodshop, Brit made a sword, Hugh made a magic wand. Someone made a slotted spoon.

One day George was supposed to go to Archery Basics, but he didn’t feel like it so we did an independent slug hunt.

We learned where to find slugs and salamanders on a bug hunt the day before with the wee ones.

George, Della, and Annie tried rock climbing, but I only have these pictures of George for now.

Scott had a birthday! I’m not sure how old he is.

We walked up the trail.

We played with this really cool frisbee.

Della: Mom, this was really good. Next time for my relaxment, I want it to be exactly the same except I want lights changing different colors over my head.

George (inquiring as to how much of his grilled cheese sandwich he would need to eat before ordering ice cream): Can we just eat half of our gorilla cheese? What do you call it? A cheese gorilla?

George: Dad, do you want to play Lemon Shoes? It’s where you put lotion on your feet and then stick lemons on them and try to walk without squeezing the lemons.

Della was talking about a “blending suit.” George said, I think she means camo.

George: Who will pinch you if you don’t wear green on Valentine’s Day?

Playing 20 questions. We aren’t getting anywhere. George hints that it is an animal and we can eat it. Turns out it’s a scorpion.

The kids were very, very sad when Steve was out of town. George asked me tearfully: Since Daddy’s not here to tuck us in, can you tuck us in twice?

Same night, watching Paddington 2. Paddington goes to jail. He is getting locked in his cell, and he tells the guard, Excuse me but Mrs. Brown usually reads me a story to help me fall asleep. The guard says, There’ll be no bedtime stories in here. The kids looked at me and burst into tears.

Playing charades and George’s mouse, rhinoceros, and dog all look about the same.

I was going in and out of the house trying to get us out the door to go to my dad’s house and I left the door open. George walks through the door and closes it and says, “Mom, just so you know, next time you go outside be sure to close the door behind you, k?”

Staying at my dad’s house. Della brought so much stuff. At one point she ran out of the room and came back wearing a robe and slippers. Another time she left and came back with her broken chrome book, headphones, and a half-eaten sucker she had been saving. She went to sleep wearing a sleeping mask (she brought two). While we were watching a movie, she kept going up to the new speakers and turning to my dad with a thumbs up and saying, “Awesome sound!” She also brought about 20 paper plates.

Della said that when she was little she thought I was a weather woman.

Della had a field trip to the Brigham city pool today. We have learned to give her some pocket money for these kinds of things so she can buy something from the snack bar. She said, Poor Cosette never brings any money. But sometimes people give her money. I said, Maybe you can give her a dollar next time. She said, I was TRYING to give her the LIFE LESSON of bring your money next time!

Della said she had to tell her friend Avani her address, but that she didn’t know her address exactly so she made one up. I said, Why did Avani need your address? She said, Oh because Avani said I could be in her club if I gave her all my personal information.

Della and George were home on Wednesday while I was working. I told Della she could follow a recipe and bake something as long as she didn’t ask for help except with the oven. She made some very gritty, salty muffin-looking things. She said the recipe had called for one “tap” of salt, but she had done three “taps.” Later we were getting ready to go to a potluck at my dad’s house and I found her collecting all of her baked goods in a dish and covering them with foil so we could take them to the party. She put them out on the counter at my dad’s house with the rest of the food. When she wasn’t looking, I put the foil back on and moved them out of sight. When I wasn’t looking, she uncovered them and put them out again.

Della (watching the PBS series Victoria): What’s a mistress again?
Me: Someone you love but aren’t married to. When you’re married. To someone else.
Della: Oh yeah. I forgot. My first grade teacher was talking about that
Me: Why was she talking about that?
Della: Because we talk about certain things in first grade–a first grade you didn’t know. Because you were homeschooled.

Della: People may not like how I look or how my name sounds or how sensitive I may probably look. But they don’t know what’s inside of me. I’m much stronger on the inside.

Della (watching the World Cup): It’s Neverland against the USA.

George: You know how in Alvin and the Chickmunks they sing All I Want for Christmas Is My Two Front Teeth? But don’t chickmunks only HAVE two teeth?

George: When you die, can I have your phone?

Clea really loves animals, which is why she got along so well with George. This is Clea curled up with Koda.

I saw Clea in the serving line not giving one inch on her vision for her dinner plate. She was talking about how she wanted a lot of rice, and she wanted it smashed down, and she wanted it in a circle. It seemed kind of ridiculous at the time, but just look at the end result…