Paulie graduated from the Executive MBA program at Sac State. It was a lot of work and now he is very tired.

Getting to the graduation was also hard work. Here are Steve and Della, stuck at the Denver airport at 9:30 pm Mountain Time — about four hours after Della’s East Coast bedtime.

Here is Della the next day in our hotel room, listening to some tunes and eating squeezy food we had packed in our carry-on. She had been up ’til 1 am EDT with no napping on what turned out to be a seven hour flight. But look at her — full on vacation mode. 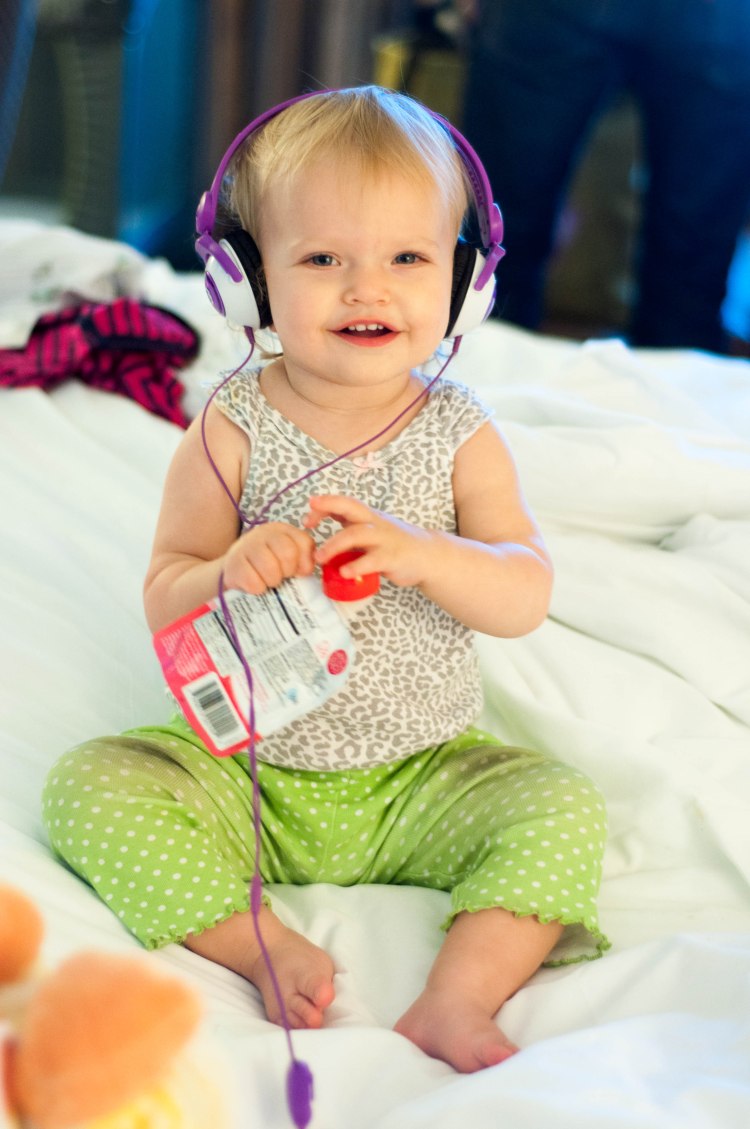 When we arrived the next day around 6 pm at Uncle Lou’s, the welcoming committee made the long journey well worth our suffering. These are Della’s California cousins. Well, first cousins once removed. Della gets a lot of her clothes from these guys. Keep growing girls! Anyway, they were so nice to Della. Clea (the younger) shared her favorite toy, a stuffed dog called Duke after the late and great real dog Duke. Della understood and immediately gave Duke a kiss. Here is a picture of a really good time.

The very next day, Paul graduated. We got to meet Paul’s girlfriend, Lyndsey, who is really good girlfriend material and also photogenic. 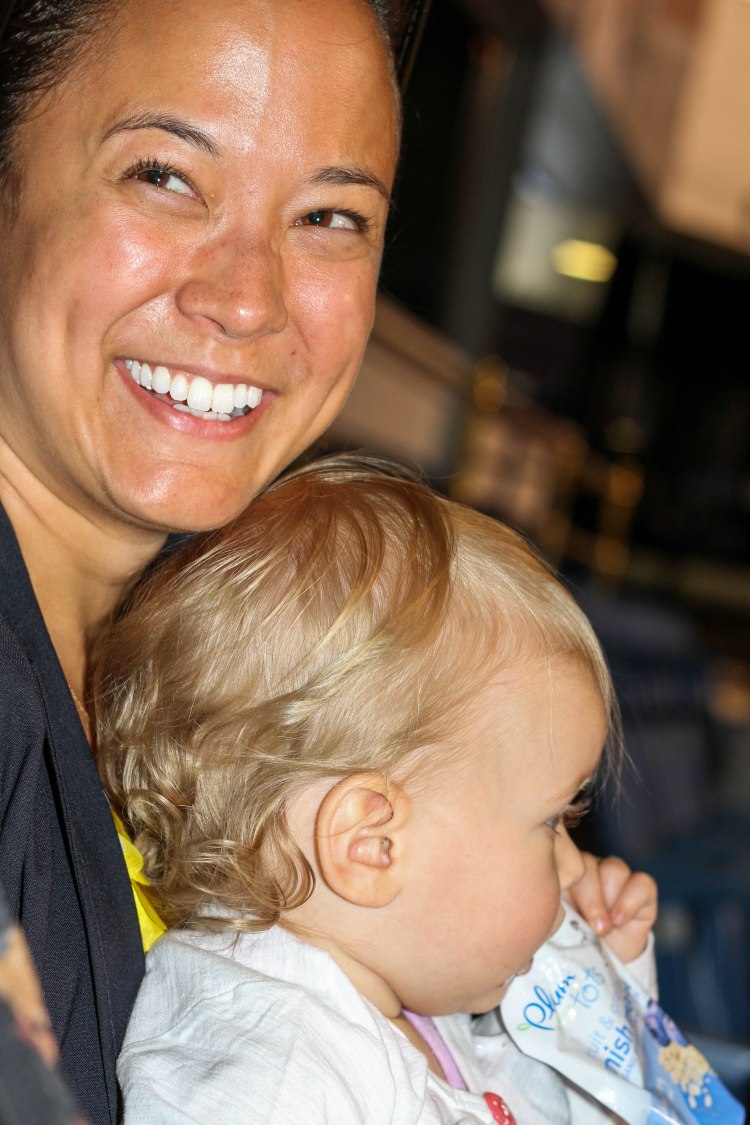 Here is Della watching the ceremony and drinking a bottle. (We had her on a mostly milk-and-gold-fish-cracker cleanse for the duration of the trip.) Occasionally as they called the names, out of nowhere Della would clap and yell like, hey, I know that guy! Which was really cute.

When it was over, everyone had to get their picture taken with the new grad. 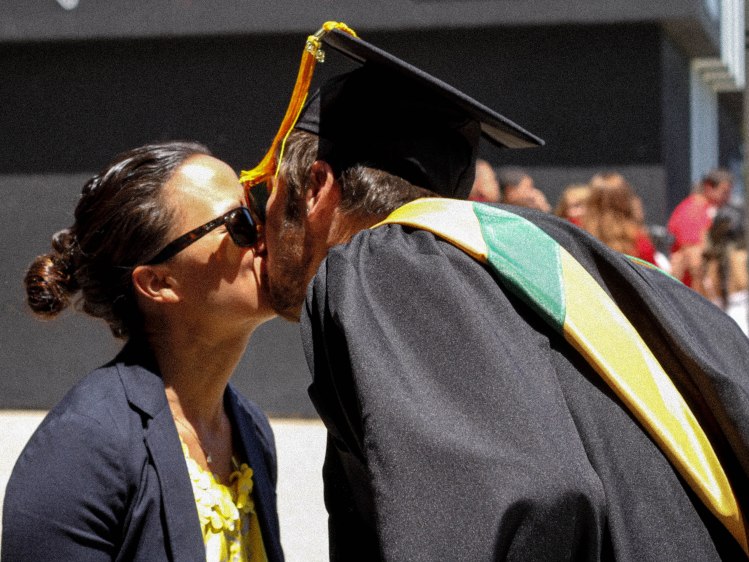 And then Della was like, just take a photo of me now.

Still with me? On Saturday we all got together for a celebratory picnic. On the way my mom and dad stopped to pick up a couple of bean bag chairs at a garage sale for easy lounging. Here is everybody:

Back at Lou’s, Violet and Clea had this swing set, and Della loved it so much it made her angry. I mean whenever she caught sight of it she started crying because she was sad she wasn’t swinging.

On our last day in Sacramento, a lot of people decided to get their picture taken with Nanny and Della in Lou’s kitchen. Here is that photo series: 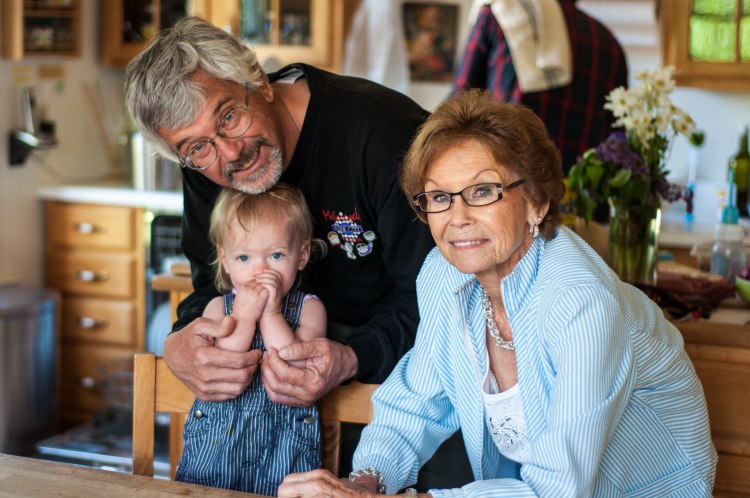 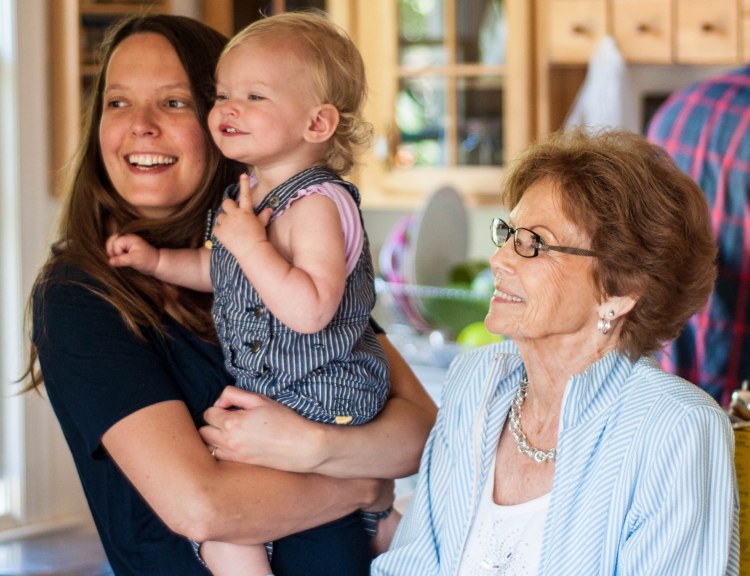 Finally, on to Oakland/Berkeley/the Bay Area, where we stayed with our good friend Reza, and where we  got to meet the newly minted Ezra. His dad, Miles, is the holy man who married us! 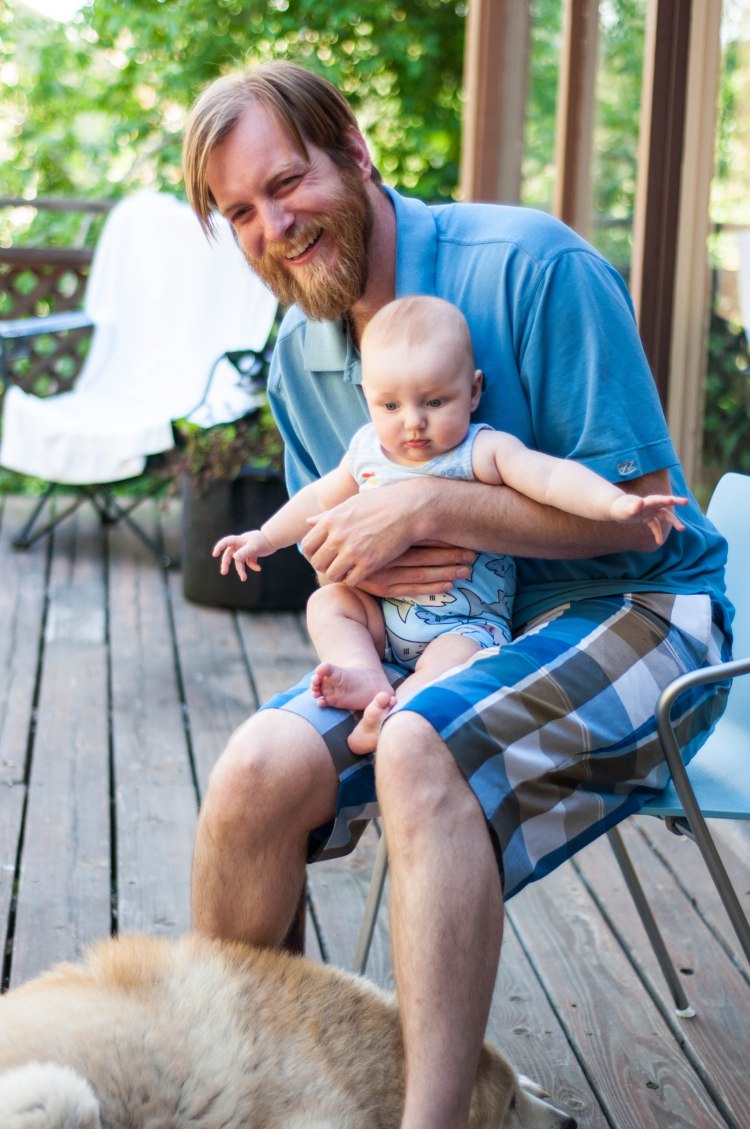 Reza was as usual a perfect host. He took us to his dad’s restaurant, Bongo Burger, est. 1968, and also we snuck into the science building at UC Berkeley where we saw this prehistoric creature.

One day we went to Half Moon Bay, where Della visited the Ritz and ate at a fancy restaurant called Pasta Moon. She ordered the pea and fava bean salad and wore a tony cashmere suit that made her look very handsome.  We were very proud of her good behavior. Plus she did her trick of eating a full lemon slice, rind and everything, which we always think is impressive and funny.

But fancy restaurants and hotels have nothing on a good set of swings. We visited this playground twice, and Della was glad we did. No need to tell you about our flight home, which involved a one-hour delay (no biggie), a one-and-half-hour increase in our flight time due to weather, lost luggage, and a long line for taxis at 1 am. Better to end on a high note.