On Black Friday, Della and Annie played night night in the crib at Grandma’s house. So far, this is the strongest of the Anderson cousin friendships. 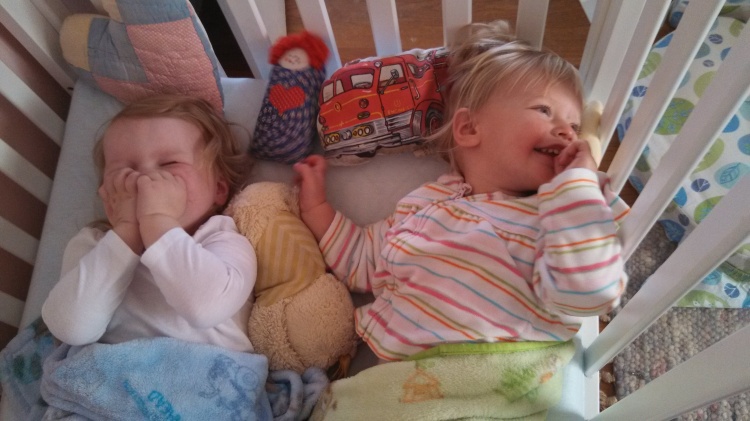 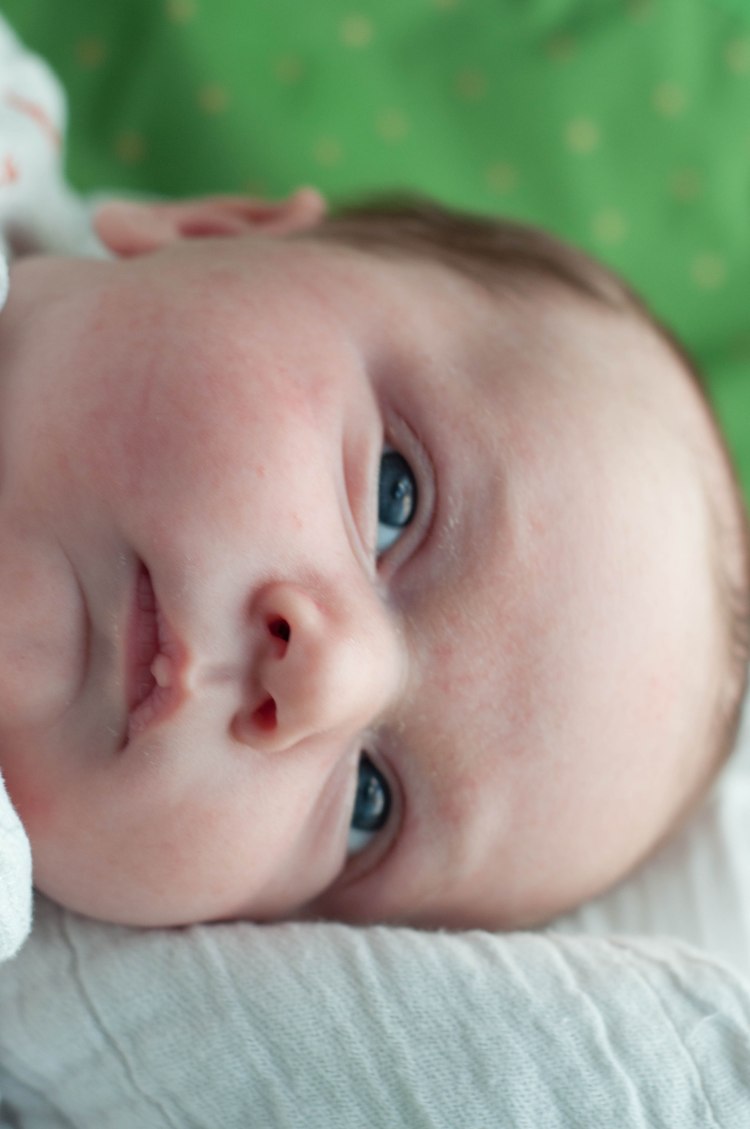 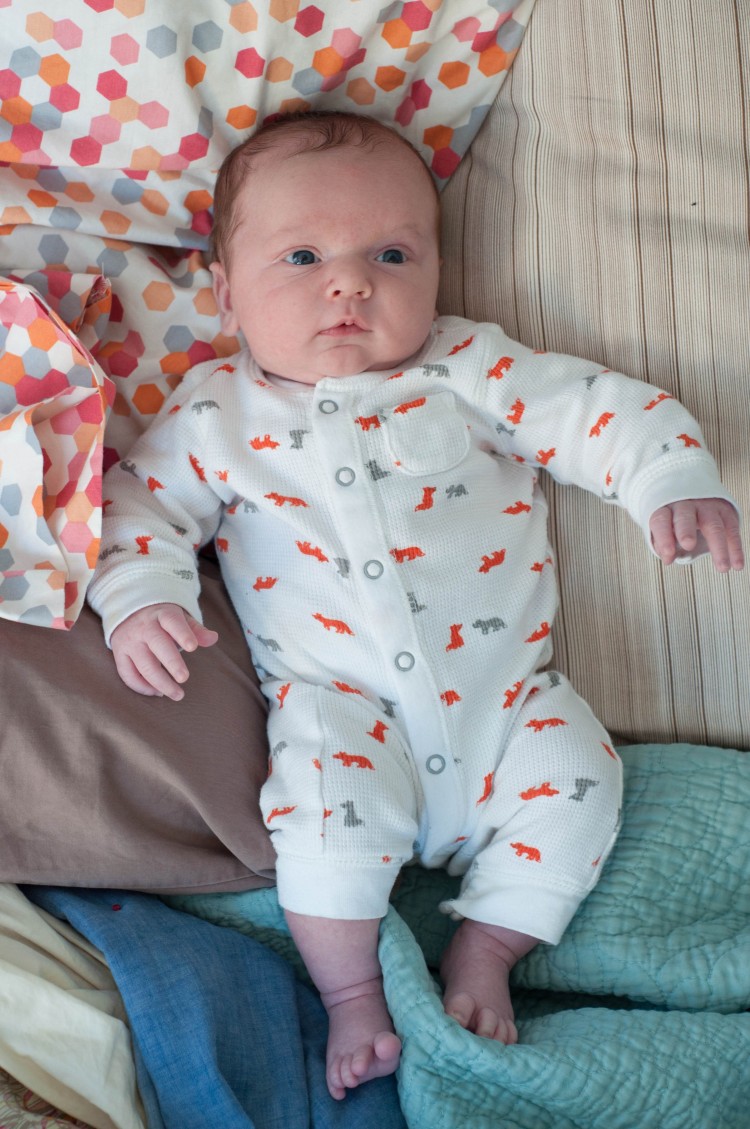 I told Steve we aren’t as bad off as those guys sailing 5,000 miles on a balsa wood raft in the movie Kon-Tiki. He found that questionable. “They’re living a dream. That guy has a guitar.”

Complaining about or even just documenting the difficulties of new parenthood is uncool. It’s not like documenting a trip across the Pacific guided only by sextants and stars. Sleepless nights, rocking and walking, shushing, exhaustion — you can’t even look forward to bragging about surviving a difficult baby. It’s not like running a marathon or going on a juice cleanse.

Della just got back from the soft playroom. Steve said she wanted to play night night under the soft blocks and suck her thumb in the ball pit. We are all tired.

Report: At his two-week appointment, George weighed in at 9 lbs 1.6 oz, up a good pound and a half from his birth weight. Impressively, his head circumference is in the 97th percentile.

Resourcefully, Della found this rogue nipple to curb her jealousy over the baby getting a bottle. She wears this hat when she’s ready to run away. Bye! she says, hat on her head and Easter basket over her shoulder. 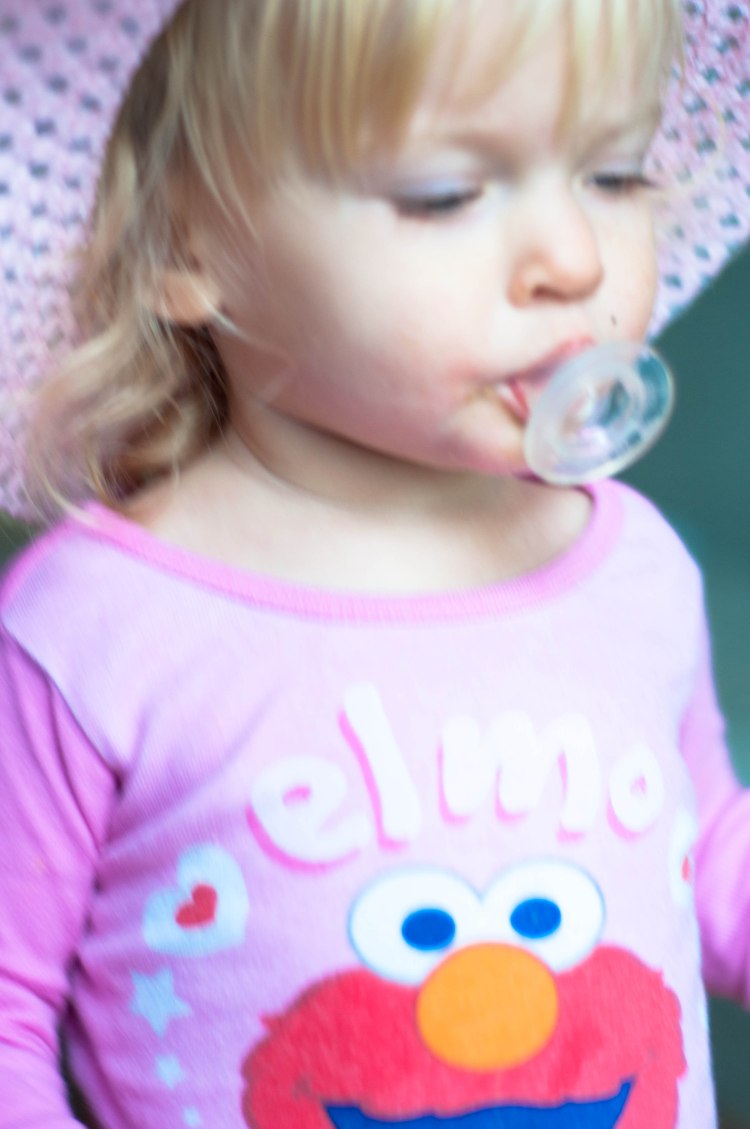 Here’s Della kissing George in the baby tent we made. 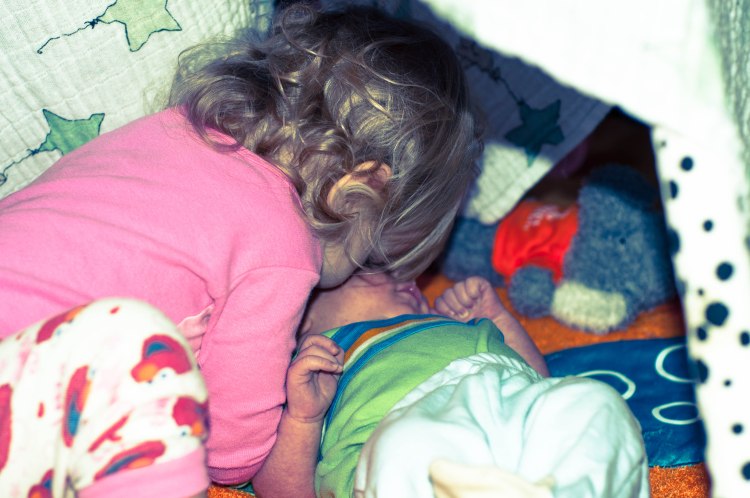 George is doing tummy time, but Della thinks he’s playing night night. See how she uses a burp cloth for a blankie? 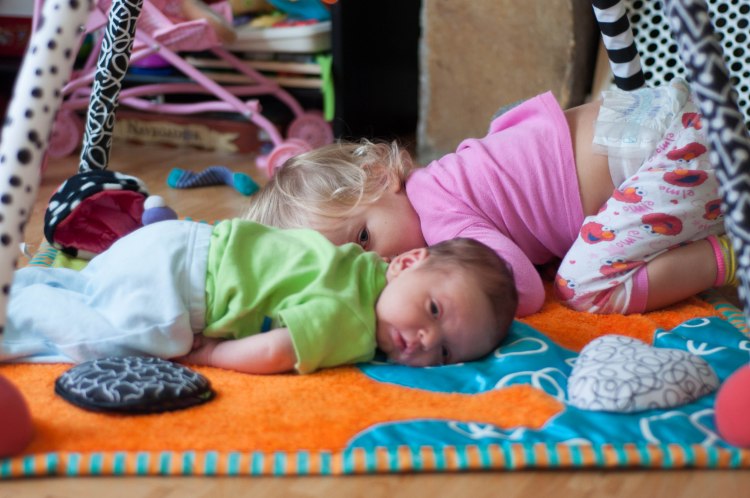 No play acting here. Just a couple of siblings sleeping side by side. 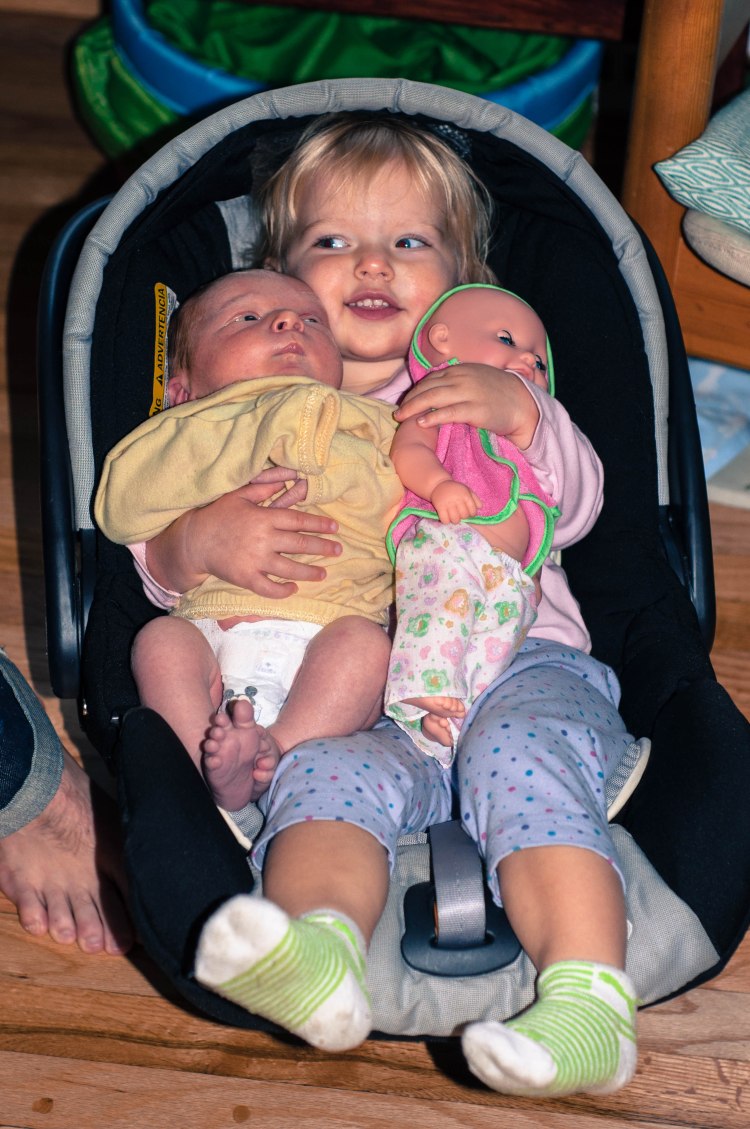 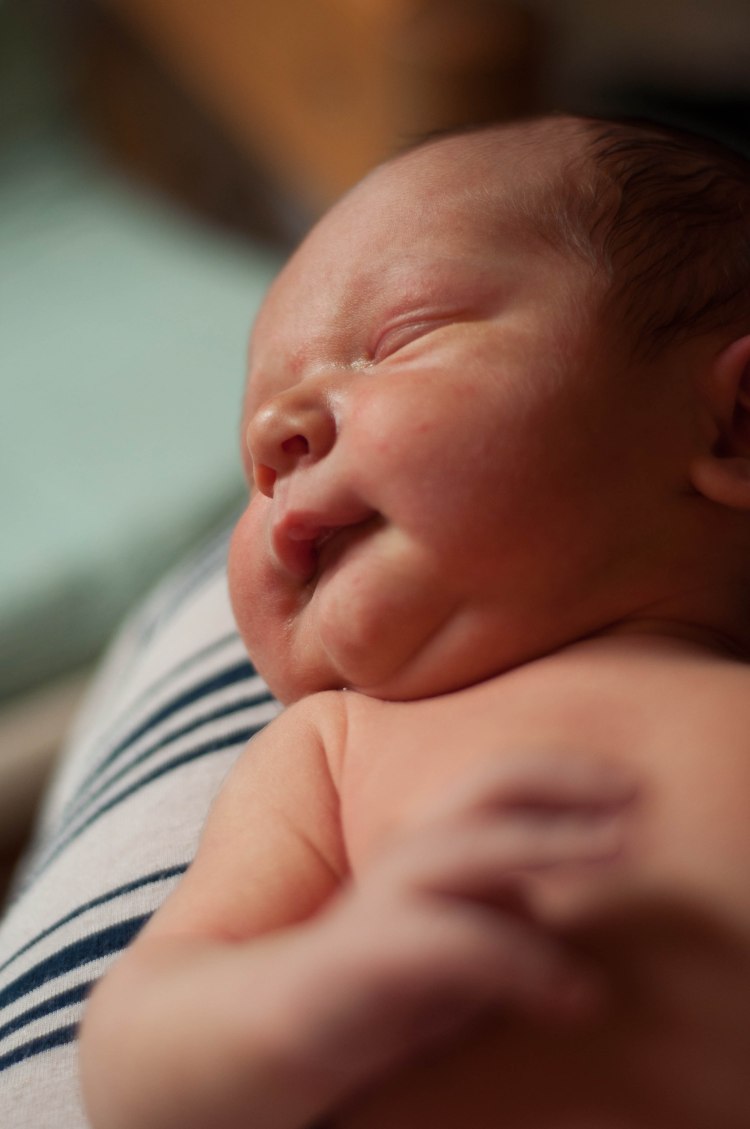 Couple of days ago Della started saying “f***”. Over and over in the living room. She finally pointed to a picture of a frog in a Christmas catalog, and we all had a good laugh. Later, wrapped in her froggy towel, she started chanting what sounded like “f*** it”, but she was just meaning “froggy,” bless her heart.

George doesn’t need a new outfit every time he spits up.
Della can watch TV and drink juice.
We’re having McDonald’s hash browns and chicken and biscuit for breakfast.
Della can play with markers and draw on her face.
I’m done hiding that big thing of pens and markers. I’m throwing it away.

From Della’s perspective, it’s: Frog! The Caterpillar Club is closed for a teacher work thing? WTF am I going to do all day? Be gentle and wear clothes? Frog that. Frog no I’m not going down for my nap. Oh froggy. I’ll just curl up with my duck and dream I have a different family.

Here she is getting tortured before paying a visit to Lee District’s soft playroom. You can tell she’s definitely thinking some four-letter thoughts.

He takes his first name from a king among men, great-grandfather George Crosby Floyd, father of lovely Linda. A steel man from Butte, Montana, George Floyd majored in chemistry and geology at the University of Montana before obtaining a Ph.D. in metallurgy from Cornell. He was one of the early developers of stainless steel and eventually became senior vice president of Vanadium. In 1965 he tried retirement, didn’t like it, and ended up working full time into his eighties. 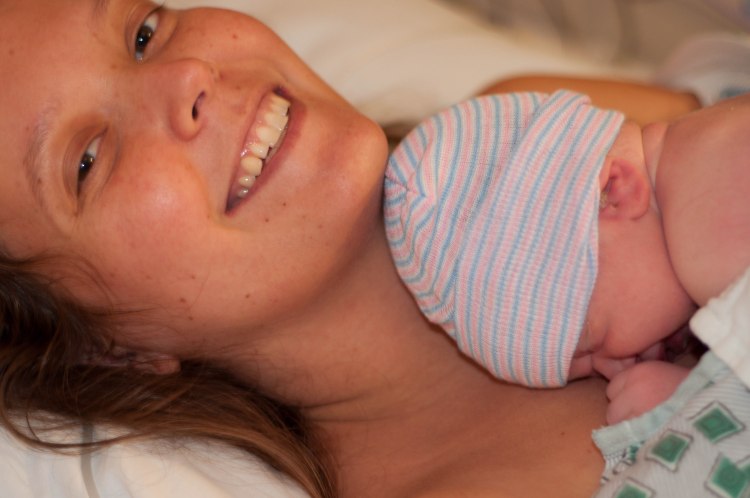 New George is also a hard worker, sucking all night with great determination in an effort to bring in mommy’s milk. George is so far very unlike his sleepy sister, who Steve says affectionately (and jokingly!) will probably be a stoner.

Speaking of Della, we love her more than ever. How expansive our sense of guilt for now also loving someone else! When we brought George home on Saturday night, Della was frenetically happy until George started crying and I picked him up. Della screamed and cried tears. Steve compared it to finding your girlfriend, whose love you always took for granted, whose fidelity you never even thought to question, in bed with another man. 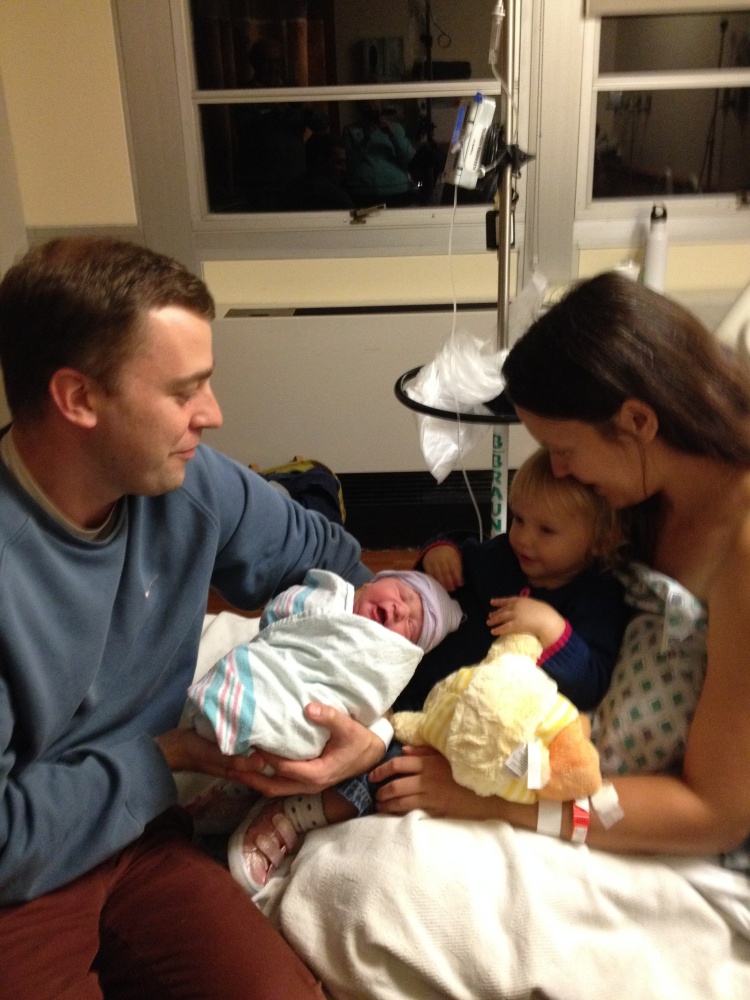 Look, Della, do you know how hard it’s going to be for George to live in the shadow of the cherub-saint? Relax. You never get over your first.

OMG I love her. I want to go pick her up from daycare and give her juice and hot dogs.

Anyways, back to George, whom I also love, whose head smells like love. I am letting him sleep on my chest as much as he wants because I may never have another monkey baby to sleep there.

That’s all for now. Georgie needs a diaper change! 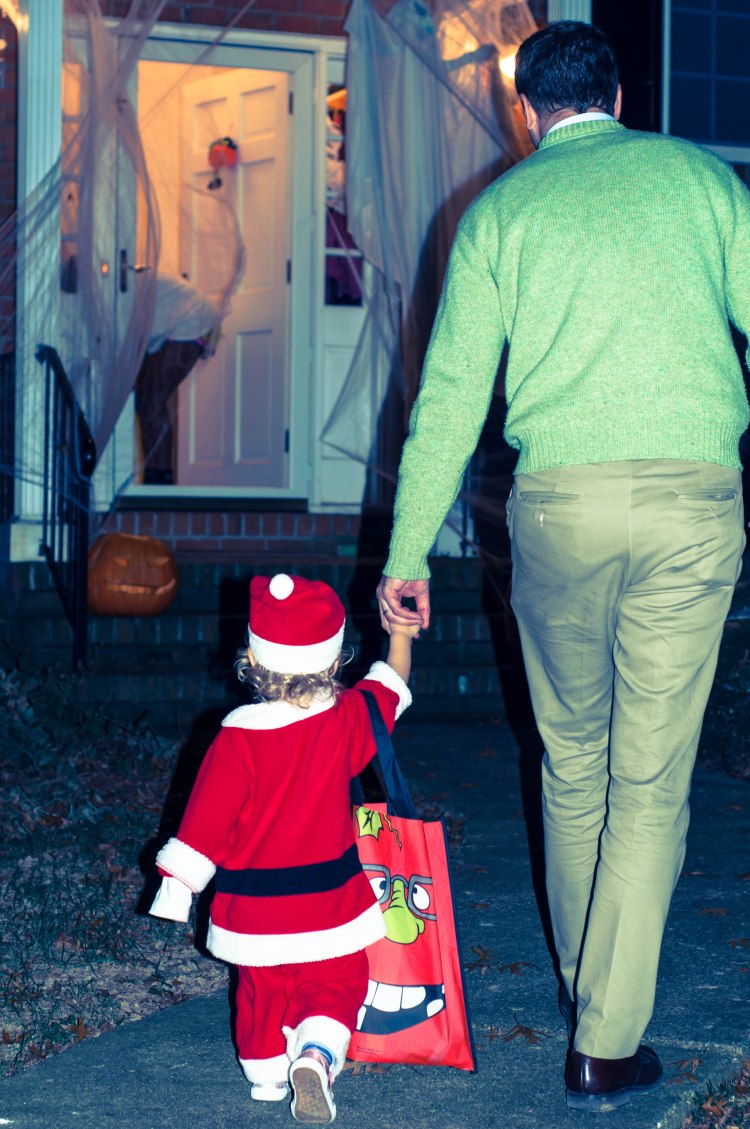