I went for a walk this morning, and when I got back this is how I found them. They said they were playing Variety Store, and George was called Georgie Jumping Bean.

Here are some agricultural images from my walk. 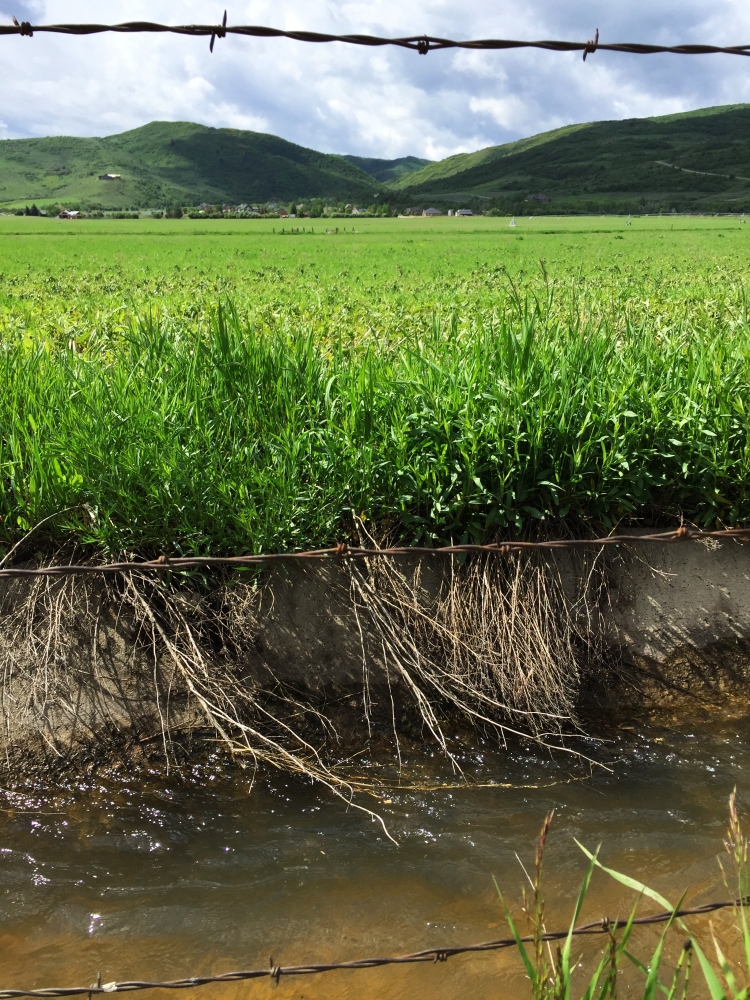 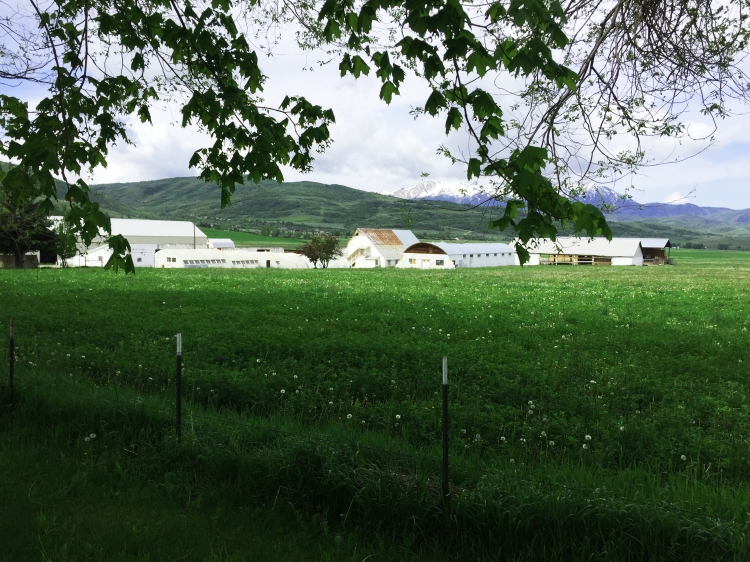 Della has some new songs: “I Love My New Life” and “Cooking on the Trail.”

And some new stories. The one on the left is George’s.

Nanny June and Uncle Don visit regularly. Here Nanny tells the children about the Heber Creeper, which is a vintage train in Heber City that gets robbed all the time and serves lunch. 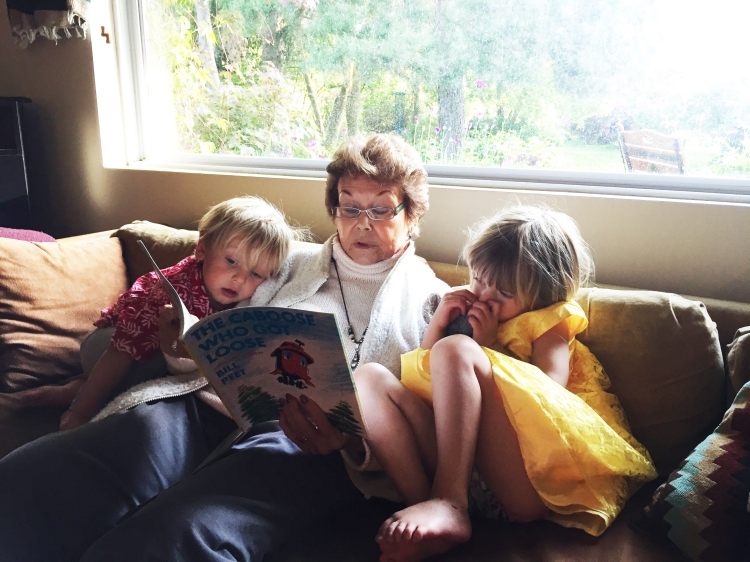 George believes this walker is designed expressly for giving him rides. 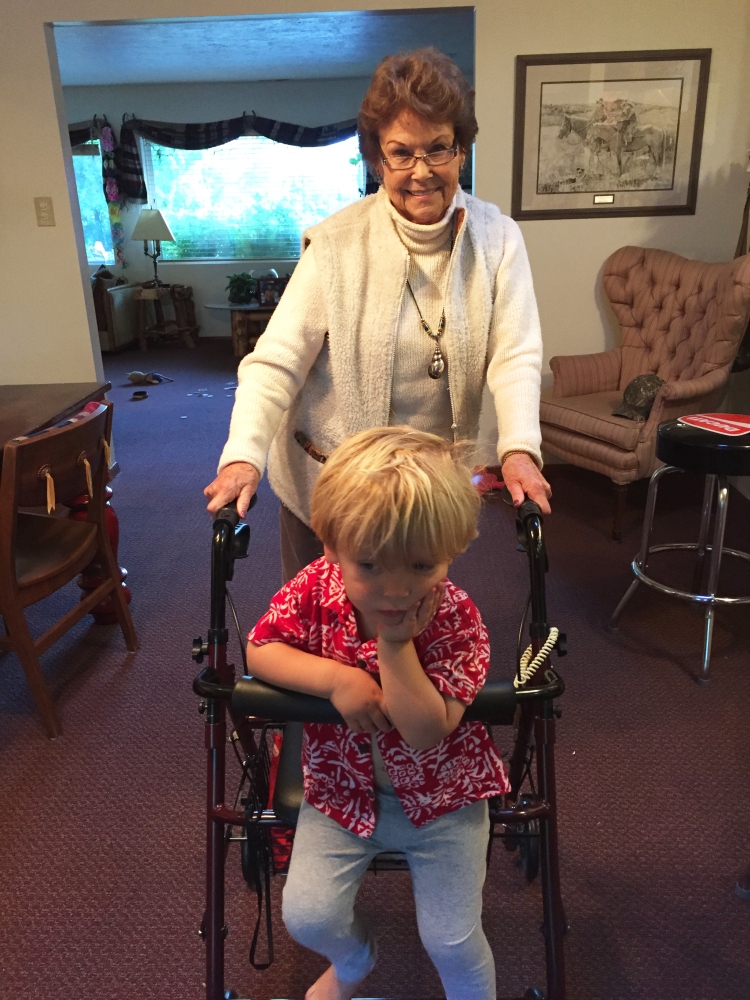 We build cup castles and knock them down. Cups are everywhere, all the time. 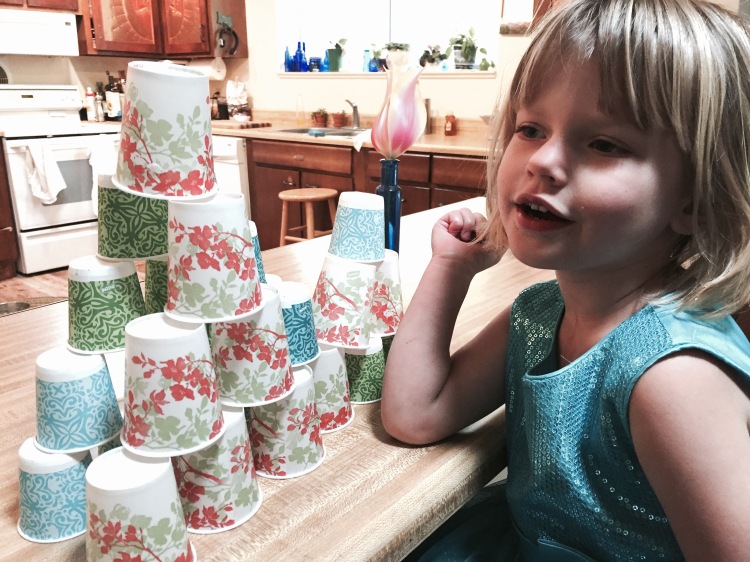 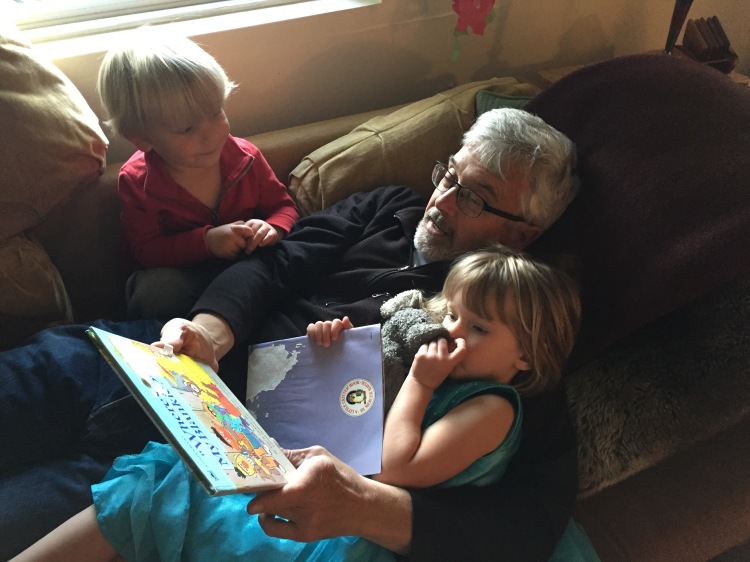 But most of all, his leaf blower. 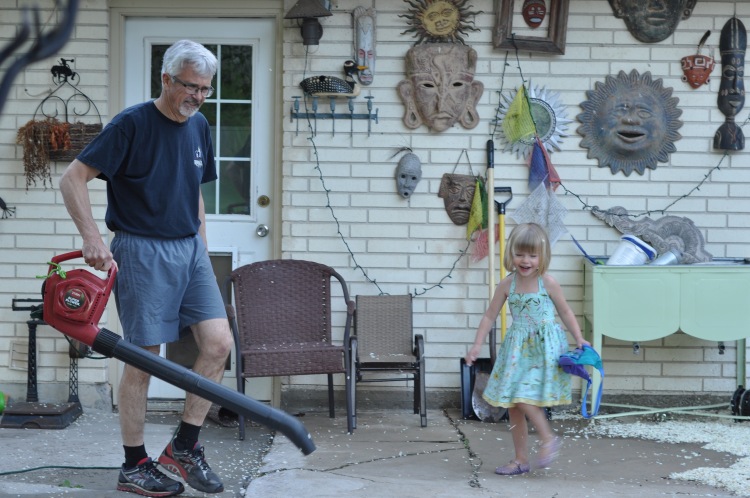 *Happy birthday to Annie, who has since turned 5.

Pineview Reservoir this morning. It’s so full, there is only a patch of sand to play on.

What are these white flowers called? 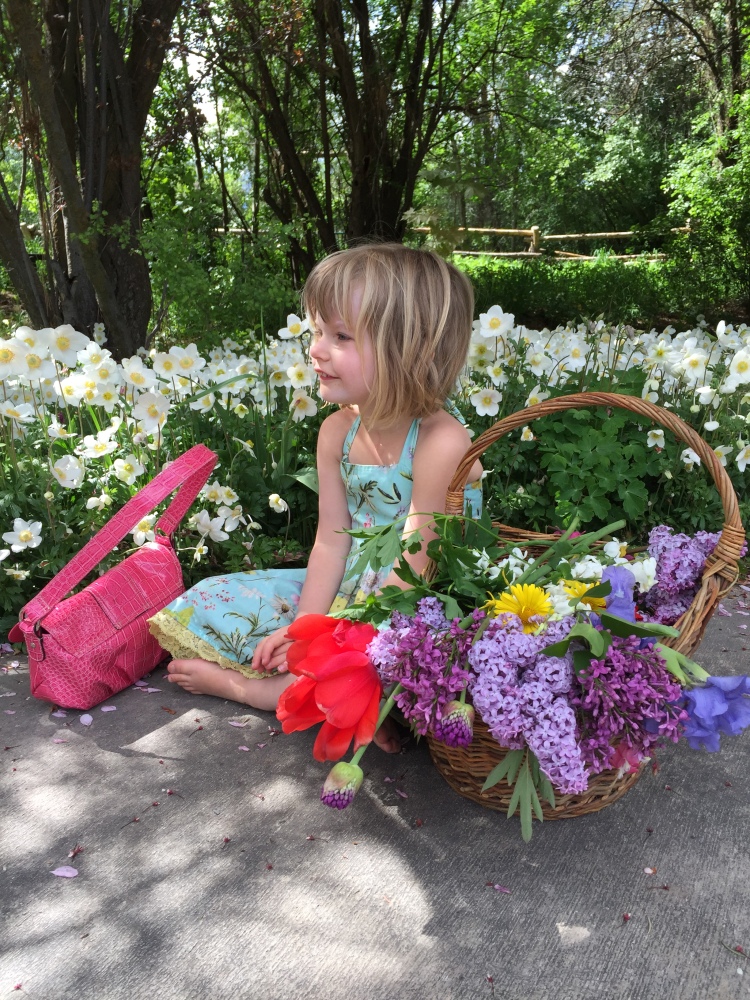 I have a backlog of things to show/tell you about because the Internet here is either very slow or else I am doing it wrong. For some reason tonight it works fine. Maybe everyone is out camping instead of streaming movies?

Tonight, an actual gig. I told Della we were going to a restaurant to watch Bappa play guitar. She said, can I bring my microphone and sing? 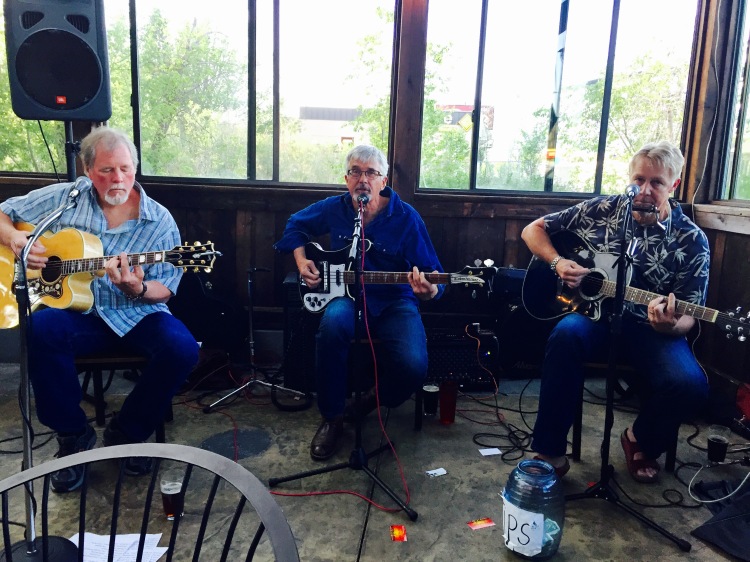 These pre-dinner photos are meant to capture their intent listening, if not their extreme enthusiasm, which they expressed later through art and dance. Della drew a picture for Bappa and left it in the tip jar. George had to be contained after excessive spinning, laughing, and dress pulling. 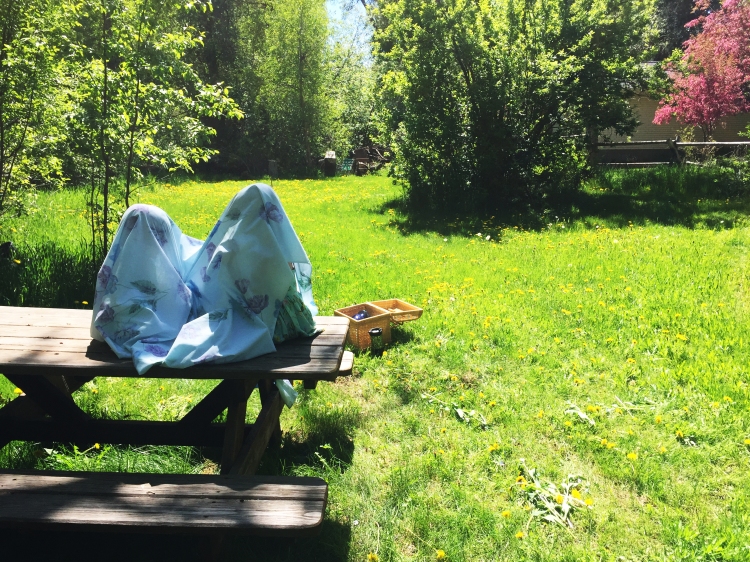 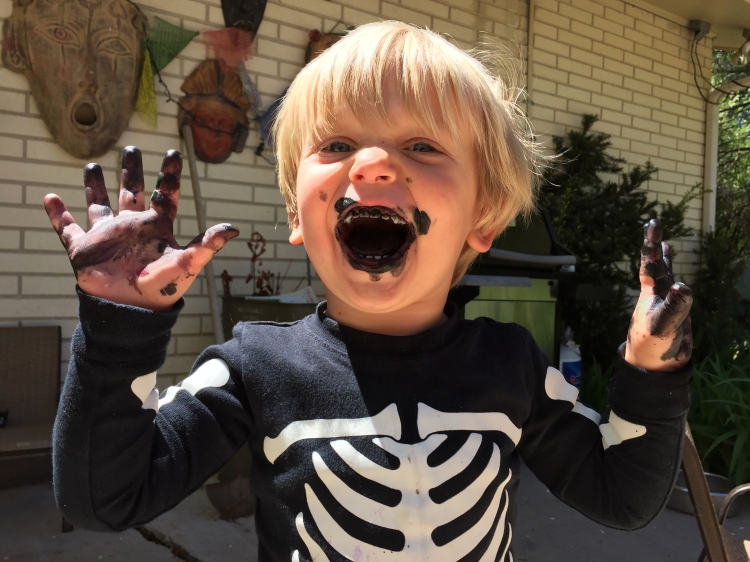 I held Liz’s chicken at bookclub. 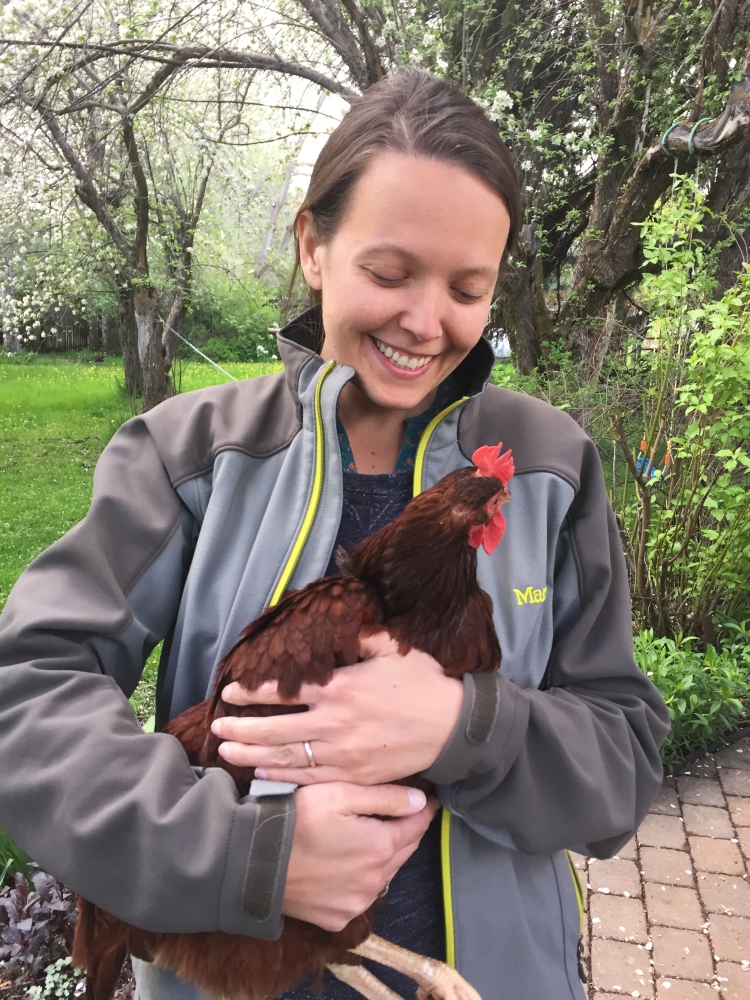 This is the toy animal section at 5-acre country-boy store Smith and Edwards.

Yesterday I made a rule about how I will only hang out in the camper with the kids once a day, and already today I broke that rule.

We got these solid chocolate statues from Weber State and the kids liked them tremendously. 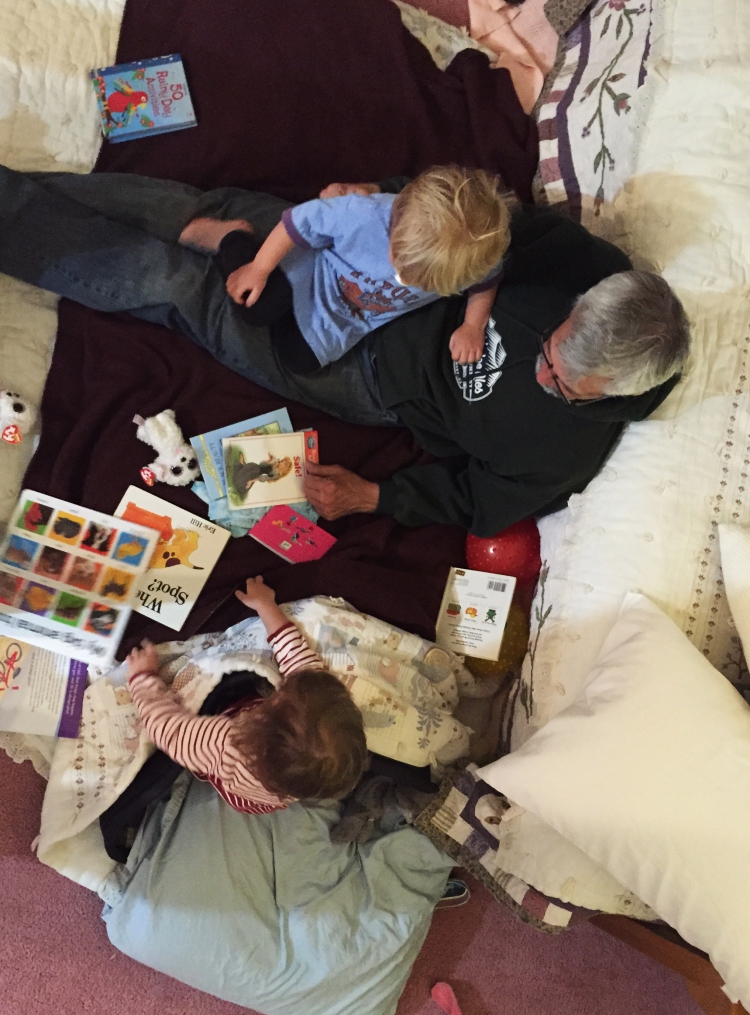 This is Bappa Mike. 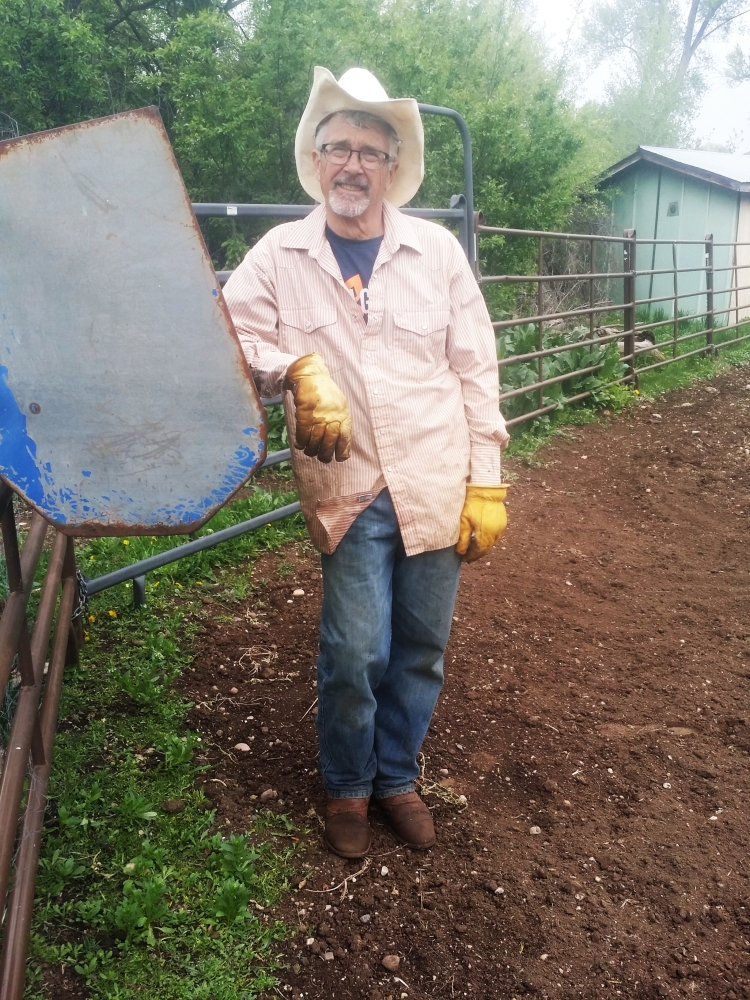 This is Uncle Paul. It was really nice to have him here except for his excessive drinking. Actually, we found several cases of beer in deep storage and it was Paul’s job to empty them into the ditch. He claimed. 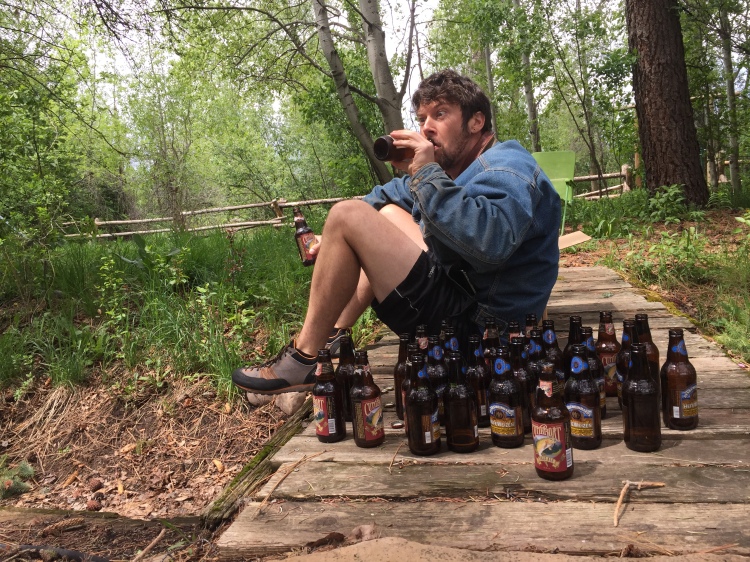 He and George also claimed there were baby birds in this nest in the white barn cupboard.

At some point we will need to start exposing him to boy things. 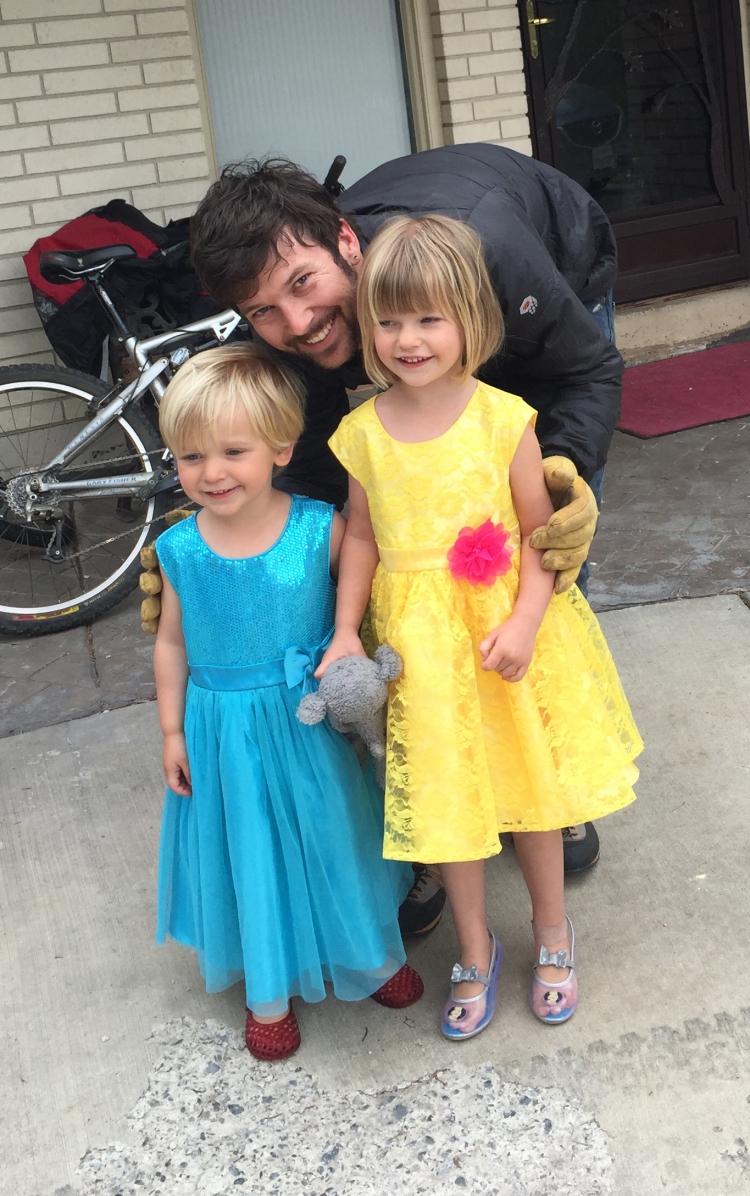 Paul suggested that I create more of a routine for them, like maybe involving exercise time and play-by-yourself time.

And last but not least, Kitty Bobby. 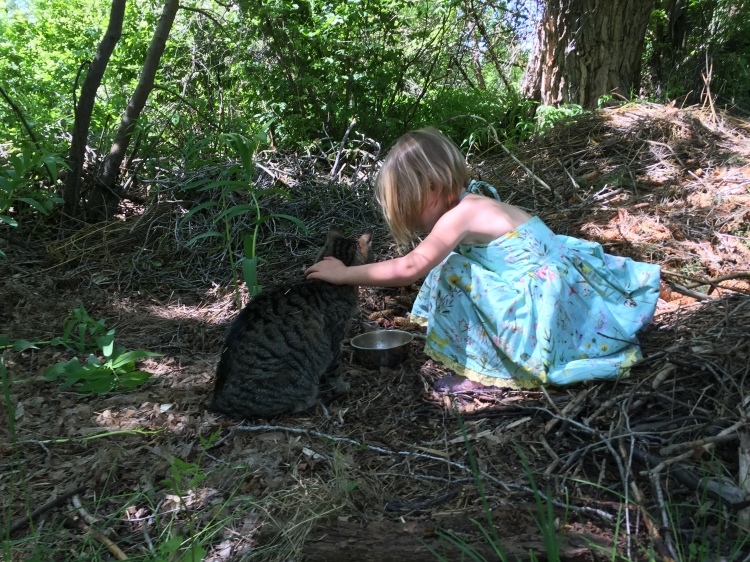 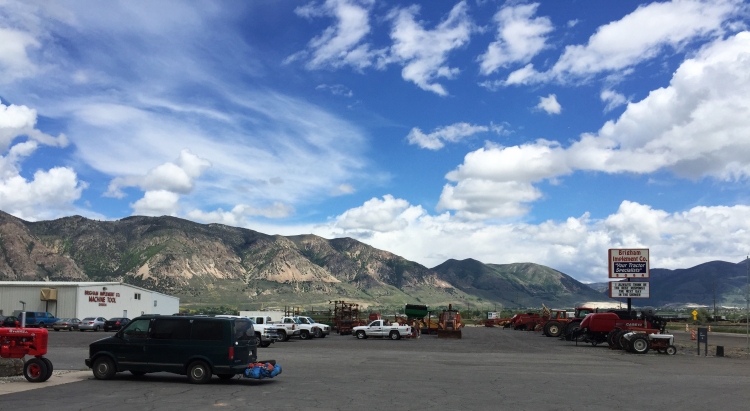 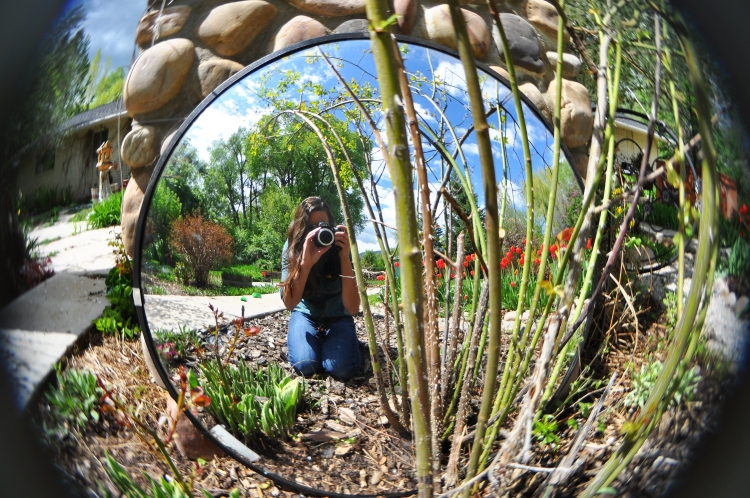 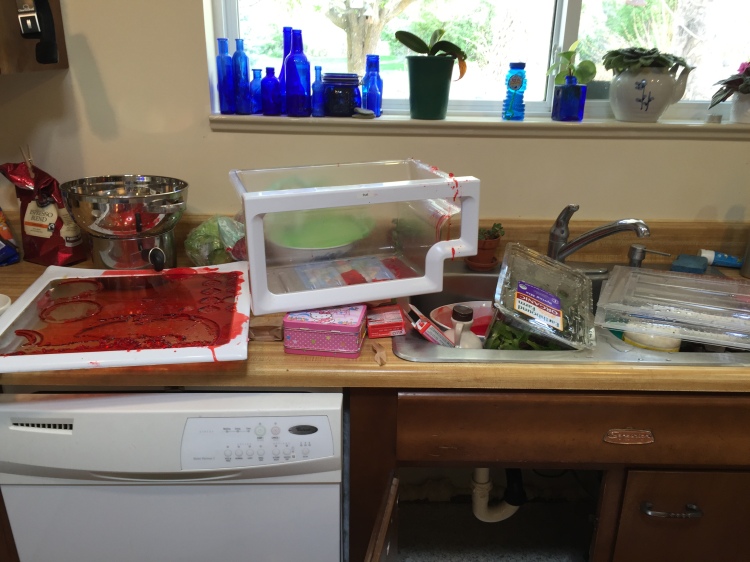 The kids had been worrying about trolls under the bridge over the (currently dry) ditch. We kept telling them there were no trolls. A ball rolled into the ditch, right next to the bridge, and we told the kids to go get it. George said no way Posé, which is his way of saying no way José. Della said she would be brave and do it. She got almost all the way down the side of the ditch and then scurried back up saying, no thanks; there’s something soft under there. I said, look, I’ll prove to you there’s nothing under that bridge. So I went to grab the ball and saw … a dead cat!

This provoked much thought and discussion. Della said the cat was a snow tiger that had died in the snow. George all day long was asking about the “old kitty,” where it was, could we go see it, even though he had seen Bappa Mike dig a whole and bury it not far from the bridge. 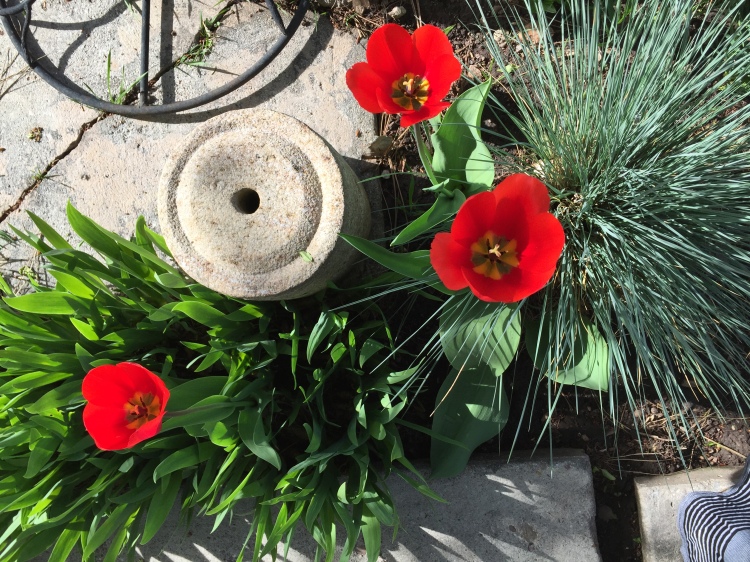 In other news, I love all these tulips. 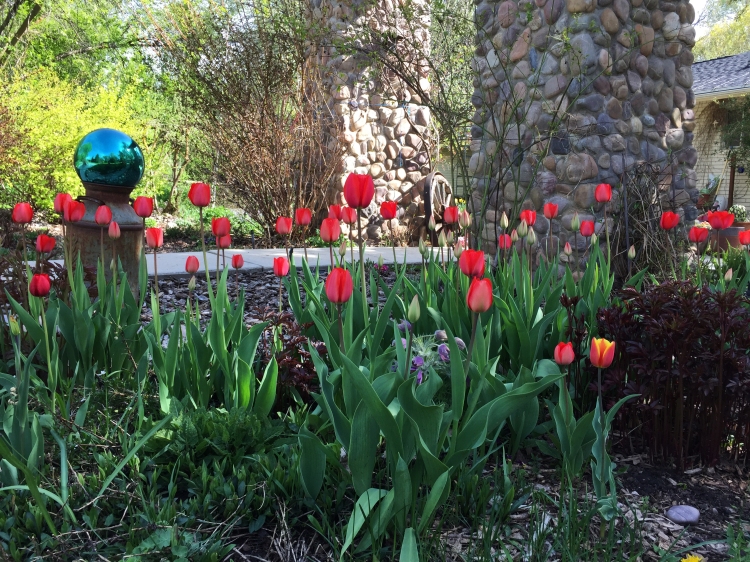 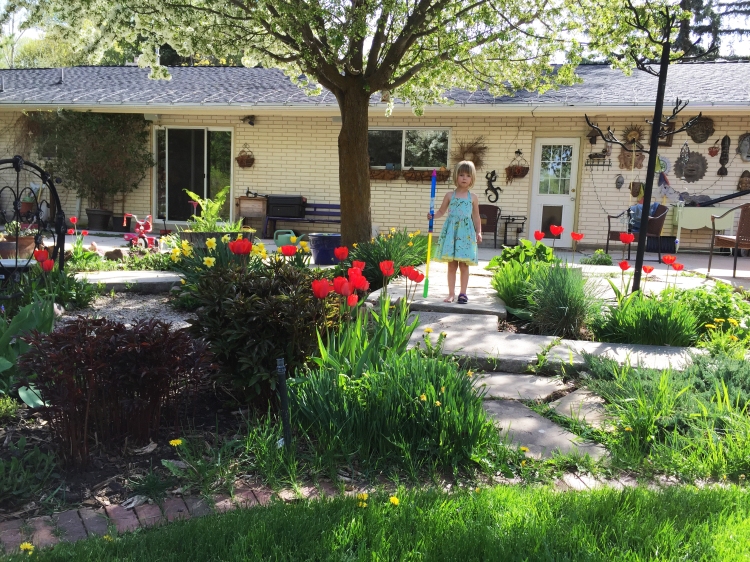 It’s the beginning of spring all over again.

Bappa Mike mowed a path to a secret garden, AND we are reading the Secret Garden (abridged).

Bappa Mike has been doing a LOT of chainsawing. 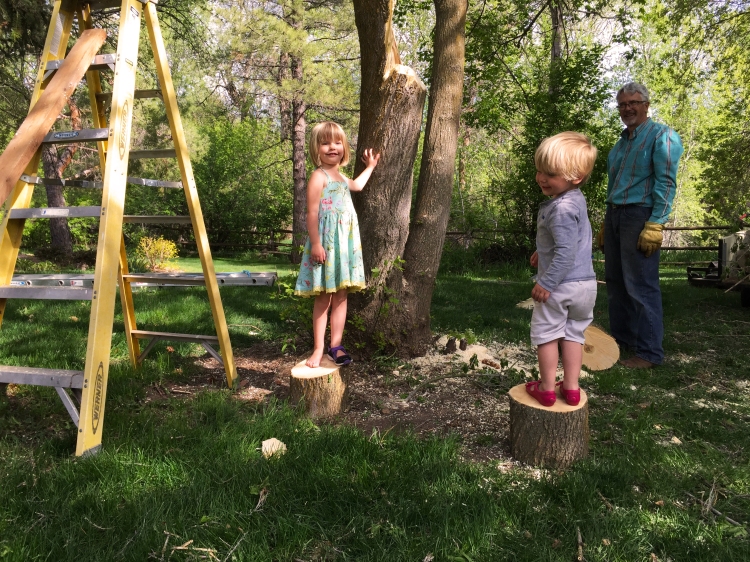 Tonight at Lizzie’s house, under Bappa’s supervision, they ate strawberries and got muddy.

Snowbasin at distant left, our mailbox at center.