George started school, and he doesn’t want to miss a single lesson. “He won’t let us sit down.” “He won’t sleep in his crib.” “He needs more sleep, otherwise he’s grumpy all the time.” Yes, these are things I know deeply in my soul. We were so proud when yesterday (Day 7) he slept for 45 minutes in his crib: his first daycare crib sleep ever.

Della and George are BFFs since George joined the Caterpillar Club. Della visits George on the infant side in the afternoons, and George reportedly enjoys her company. Also reportedly, Della can distinguish her brother’s cry from the other babies’ and announces when she hears it. The ladies there are more educational than we are here and have taught Della to give George his pacifier and other comforts when he’s sad. At home Della now asks to include Georgie (Doh-dgie) in activities such as swinging and bathing. She washes his legs and tummy in the tub, and tonight gave him a shampooing that left him in tears, but still.

Most charmingly, this morning I asked Della to talk to George while we were getting ready for work. She sat Indian style (Native American style? What do we call this?) on the couch next to him and sang ABCs and pinched his cheeks.

The only recent scuffle was last night when George was lying prone on the dining room table facing Della’s dinner and high chair. Della started saying “No!” and “Stoppit!”, pulling her plate and milk cup in toward her chest. I guess she was guarding against the possibility of him suddenly learning to crawl and eat solids.

Here they are after George’s first day. I was stretching his neck in the crib, and Della asked if she could have a neck stretch, too. So I stretched her neck, and then we danced to some sounds on the white noise machine. 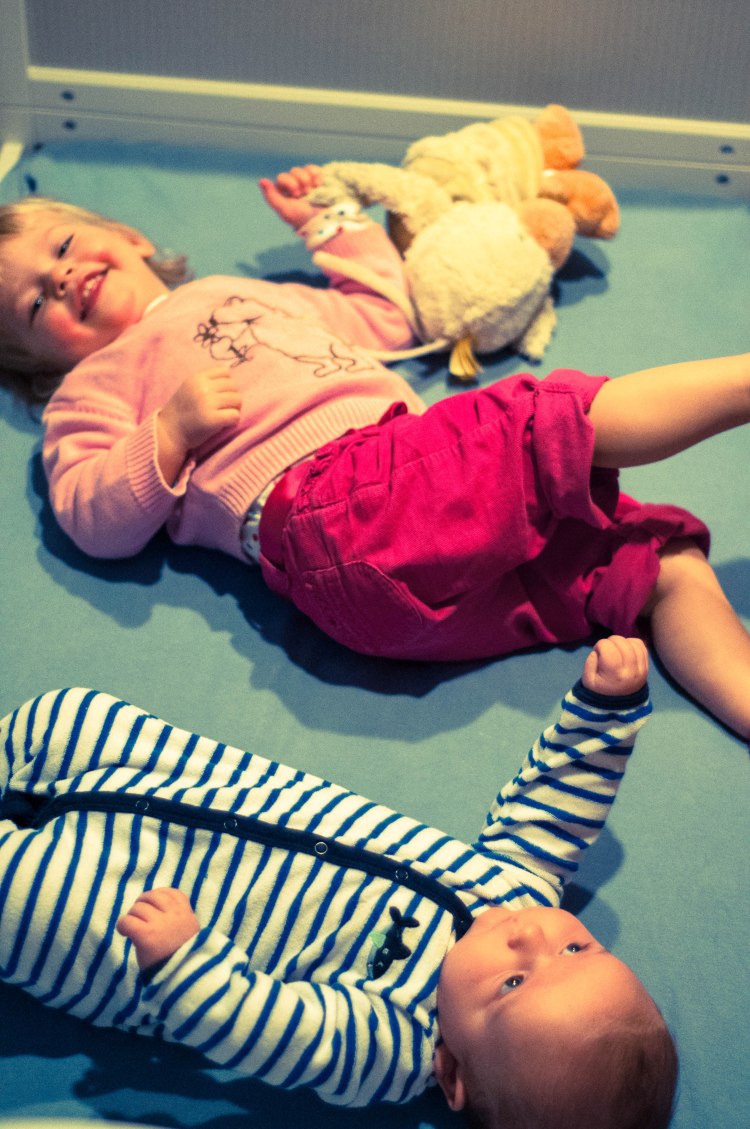